The Alexander Graham and Mabel Bell Story - A Music-Drama

CTV Features The Bells of Baddeck

A wonderful feature on CTV Atlantic News on The Bells of Baddeck. Check it out!

CBC features Bells of Baddeck in the lead up to Opening Night!

The Bells of Baddeck was featured on Information Morning – Cape Breton (CBC Radio) yesterday – listen to the interview with creator Lorna MacDonald and some rehearsal clips! (Host: Stephen Sutherland)

CBC also featured Bells of Baddeck in April – click below to listen
www.cbc.ca/informationmorningcb/2015/04/07/bells-of-baddeck/

Captioning for The Bells of Baddeck

The Water Room of the Alexander Graham Bell National Historic Site will be alive with THE BELLS OF BADDECK at its world première on Friday, July 3rd at 7:30 PM.

The first music production based on the story of Alexander Graham and Mabel Bell, created by Cape Breton’s Lorna MacDonald, tells the story of the Bells, their love and family life, their music, and the influence of Cape Breton in their lives. Featuring music of Dean Burry, Robbie Burns, and traditional fiddle music played by Cape Breton’s finest – Chrissy Crowley, Rachel Davis, Dwayne Coté, and Rosie MacKenzie, the show takes one back to the turn of the century and the remarkable people who shaped the Cape Breton life of Alec and Mabel.

For the first time -­ and in honour of Mabel Bell, who was deaf -­‐ the show is providing captioning for the hearing‐impaired. In real­‐time, the show can be followed by deaf or hearing-‐impaired audience members through the use of Surtitles, which is a convention borrowed from classical opera and will be operated by recent U of T graduate Ryan Downey. Lorna MacDonald says “We have worked hard to make this acoustic production accessible to everyone – it will appeal to all ages, to all levels of hearing, and it pays homage not only to the genius of Graham Bell, but to the fortitude of his dear wife, Mabel, and the love they had for each other and for Cape Breton. It is a truly remarkable story told by fabulously talented Canadian performers.” Allison Angelo and Geoffrey Sirett sing the roles of Mabel and Alec.

Robyn Cathcart is featured as Casey Baldwin, and on opening night Bethany Reid sings young Mabel. She is double cast with Sydney’s Sarah Walker on Tuesday and Wednesday nights.

The Bells of Baddeck opens at 7:30pm on July 3 and runs every Tuesday, Wednesday, Friday and Saturday of July. It closes on August 2. Tickets are available at the Alexander Graham Bell Museum and the Visitor Information Centre in Baddeck, at bellsofbaddeck.etixnow.com and 1-­‐888-­‐790-­‐1477

The Bells of Baddeck: The Alexander Graham and Mabel Bell Story

The Bells of Baddeck production (www.BellsofBaddeck) enters a new phase this weekend with the arrival of cast members at the JAD McCurdy Airport. A sponsoring partner, the McCurdy Airport welcomes none other than JAD McCurdy himself, played by baritone and Newmarket, Ontario native Johnathon Kirby.

“Johnathon was in my mind to play McCurdy from the very beginning. Not only is he a fine singer and actor, he is someone that you really want to spend time with, and that goes a long way when you are casting for a show for a 7 week period.” noted creator and producer, Port Morien native Lorna MacDonald. “The Bells loved McCurdy like their own, and I expect that Baddeckers will soon feel that way about Kirby!”

Find out more about the full cast. Purchase your tickets now.

“Geoffrey Sirett just about brought the house down singing the “Tosca” excerpt with a muscular, powerhouse baritone that held its own in contest with the orchestra’s playing at full throttle.” Buffalo Philharmonic Orchestra and Chorus (Buffalo News). The Kingston, ON native is an amazing talent – he plays, sings, cycles (Bicycle Opera), dances – and he will win your heart as the ingenious AGB. In just one month, you’ll hear our “powerhouse” Geoffrey Sirett in Baddeck. He’s not to be missed

Find Bells of Baddeck on NovaScotia.com!

Check out the link below to see our listing on NovaScotia.com and make Bells of Baddeck a highlight of your Nova Scotia adventure this summer!

The Bells of Baddeck has been chosen as one of Desination Cape Breton Association’s “15 in 15” – 15 Cape Breton tourist highlights for summer 2015!

The selected #15in15 events were announced Thursday, April 9 at a DCBA Industry Day event in Sydney – The Bells gave a special sneak peak!

Lorna MacDonald and young cast members of Bells of Baddeck

The Bells of Baddeck have also been chosen by the Destination Cape Breton Association & Cape Breton Island tourism to perform excerpts from our show April 24th – 26th, 2015 at the Saltscapes Expo in Halifax!

Find out more and browse the other “15 in 15” events at www.cbisland.com/festivals-events/15-events

Big Spruce Brewing Co. is unveiling its new raspberry sour wheat ale, the Silver Tart, based on a recipe taken from the notes of famed inventor Alexander Graham Bell.

SYDNEY — Alexander Graham Bell’s recipe for a syrup has been brought back to life by a Cape Breton craft brewery.

Jeremy White, founder and alesmith with Big Spruce Brewing Co., said a new brew has been launched based on the famed inventor’s notes.

“It was something he referred to many times as ‘raspberry vinegar,’ and he actually gives a recipe for it,” White said Monday.

“It looks like what he was creating was either a sour cordial or a lacto-fermented cordial — or something like that — out of vinegar, fresh raspberries, lots of sugar and a little bit of water.”

Bell, who is best known for inventing the telephone, would have boiled and bottled the syrup, meant to be mixed into water.

White said although there’s no reference to alcohol in Bell’s notes, its creation isn’t outside the realm of possibility.

“There’s plenty of sugar there if he’d aged it on yeast — or something like that,” he said. “Something might have happened, alcoholic, but no one’s quite sure what additionally may have been done to it.”

Based on Bell’s concoction, Big Spruce has created a wheat ale that has been kettle-scoured, fermented and aged on fresh raspberries.

As with most of the Victoria County brewery’s batches, it bears a tongue-and-cheek name — the Silver Tart — a reference to Bell’s days as an aviation pioneer.

“It’s really quite a refreshing-style beverage; the sourness gives it a lot of nice thirst-quenching properties, so it’s going to be a good summer drink,” said White.

“When I tried it for the first time, I thought, boy, this needs to be served in champagne flutes.”

White said he was approached by staff at the Alexander Graham Bell National Historic Site in Baddeck to create a beer for the museum’s upcoming musical drama, which begins July 3.

The Bells of Baddeck, by Port Morien native and soprano Lorna MacDonald, recounts how the Bell family came to Cape Breton and fell in love with its people, music and Gaelic charm.

White said this is the second time the brewery has been asked to recreate a historical beer, having already brewed a seasonal spruce beer for the Fortress of Louisbourg National Historic Site.

“I really think the craft beer world is ready for new and interesting stuff, and that’s what this beer is,” said White.

“It’s unique, and a beer that can differentiate us from the market.”

White said the museum is now seeking a liquor licence to serve the Silver Tart to patrons during intermissions at The Bells of Baddeck performance.

The ale will be offered for limited release at Big Spruce’s Nyanza tasting room and at a few drinking establishments in Halifax.

The Bells of Baddeck is proud to have been featured on CBC Radio One’s Information Morning Cape Breton today (Friday, November 28th)!

Listen to the interview with creator Lorna MacDonald. 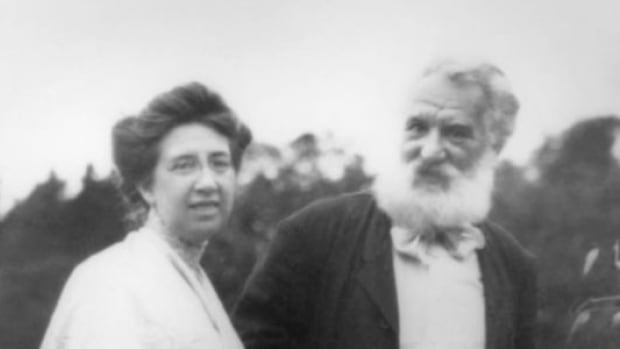 A new production about inventor Alexander Graham Bell and his wife Mabel will take flight this summer.

Auditions for The Bells of Baddeck were held this week in Cape Breton; the show will run from July 3 to August 2, 2015, at the Alexander Graham Bell National Historic Site in Baddeck.

The music drama is written by soprano Lorna MacDonald, a music professor at the University of Toronto who grew up in Port Morien and sticks close to her Cape Breton roots.

She says she’s always been intrigued by the story of the Bells.

“Quite a few years ago I had the idea that there’s a story here beyond what we know about the telephone and the Silver Dart,” she said. “And a big story in Mabel, who was really an incredible woman, an amazing advocate for women and children, very much Graham Bell’s equal partner.”

… Read the full article on CBC.ca